There’s a lot of buzz around decoupled content management systems (CMSs) at the moment, so we were excited to listen to Drupal founder and Acquia CTO Dries Buytaert’s webinar on decoupled Drupal.

On 11 January 2018, Drupal founder and Acquia CTO Dries Buytaert and Director of Research & Innovation Preston So led a webinar on decoupled Drupal. You can view the webinar and presentation slides on the Acquia website. We didn’t watch it live (3am for East Coast Australia!), but we did register and review the webinar. Below is our summary and some key takeaways you may be interested in. You may also like to check out Acquia's Decoupled Drupal ebook.

What is a decoupled CMS?

A decoupled CMS, also known as a ‘headless’ CMS, separates the frontend display from the content management system. Dries discussed the power of a decoupled CMS when used as a content service for distribution to multiple channels, such as mobile, Internet of Things, conversational user interfaces and digital kiosks.

Dries sees decoupled CMSs as delivering benefits to both content creators and developers.

Dries also introduced some of the advantages for developers, such as:

Why a decoupled CMS?

Two main factors have led to the adoption of decoupled CMSs. Firstly, the desire to separate architecture and presentation so frontend and backend teams can work independently; and secondly the drive by marketers and publishers to push content to multiple channels that aren’t necessarily linked to a website. 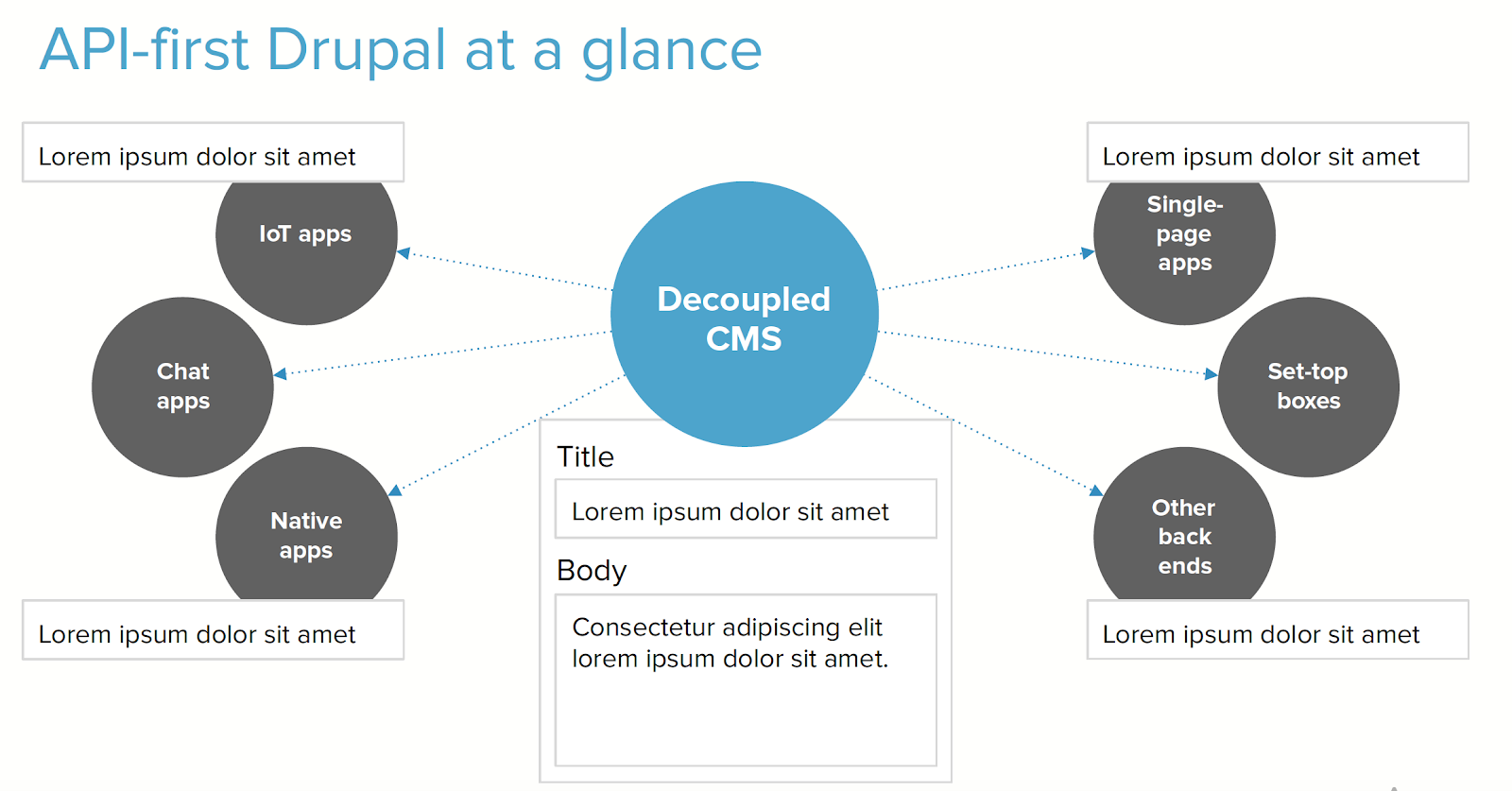 While a traditional CMS performs a HTTP request to the CMS, decoupled setup does a four-step request: 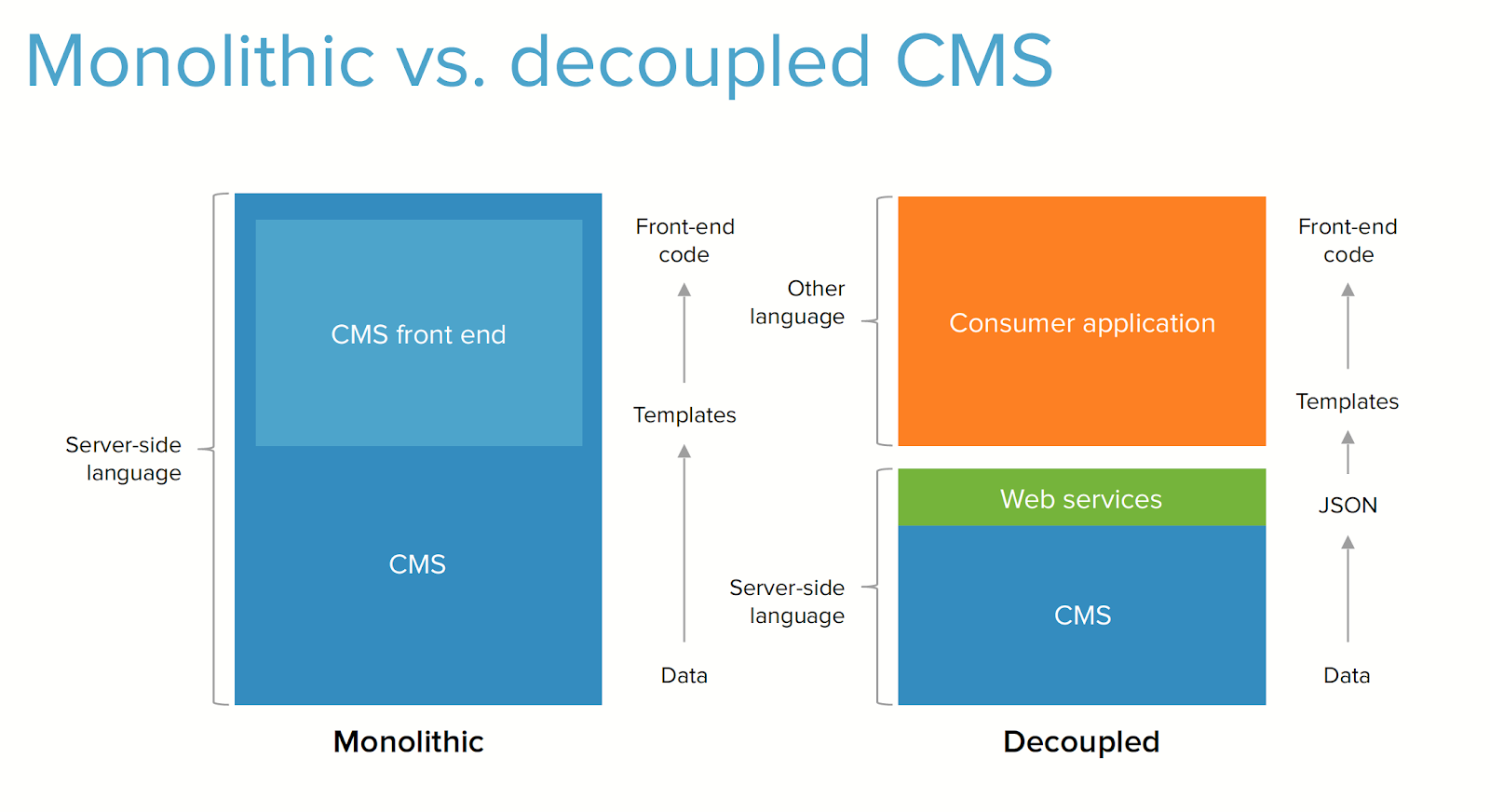 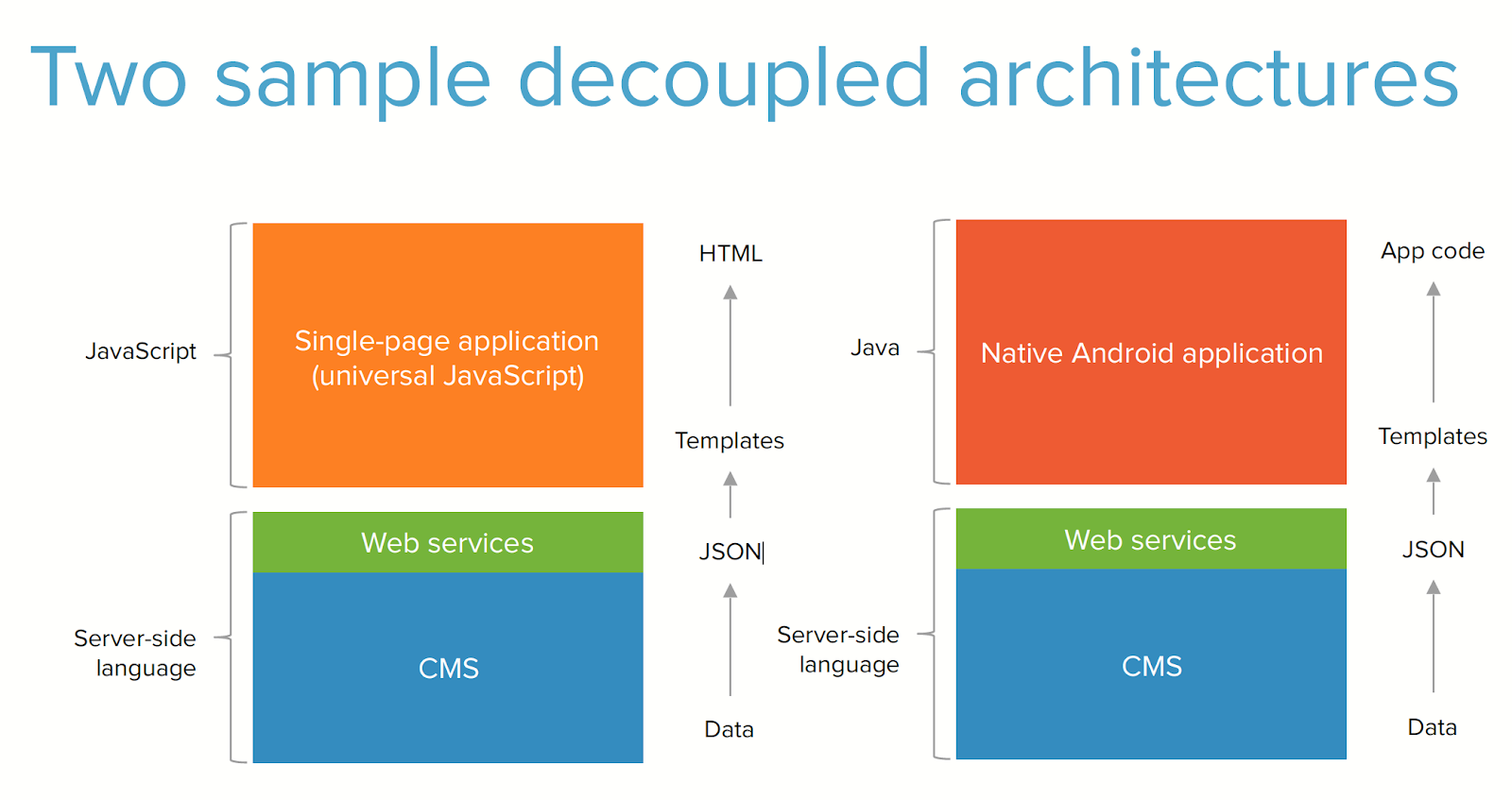 The execution model follows this path:

Tradeoffs of a decoupled CMS

This section of the webinar focused on the disadvantages of a decoupled CMS, emphasising the importance of developers understanding these tradeoffs so they can make the best decision for each project.

Some of the disadvantages covered were:

The webinar then covered some additional advantages of a decoupled CMS, specifically:

Dries said that when considering a decoupled CMS, you need to look at each project to decide if a decoupled CMS is a good fit. For example, he highlighted the fact that a decoupled CMS is probably not a great idea for a client with lots of content creators who need, and use, layout features and page preview.

Why Drupal is an ideal decoupled CMS

Specifically he mentioned the tools available, the web services support and the integration between Drupal and different JavaScript frameworks.

He described Drupal as a ‘hybrid’ offering — a point of difference to competitors, which are only decoupled. He referred to Drupal’s API-first approach as a big win compared to the API-only approach of other decoupled CMSs. 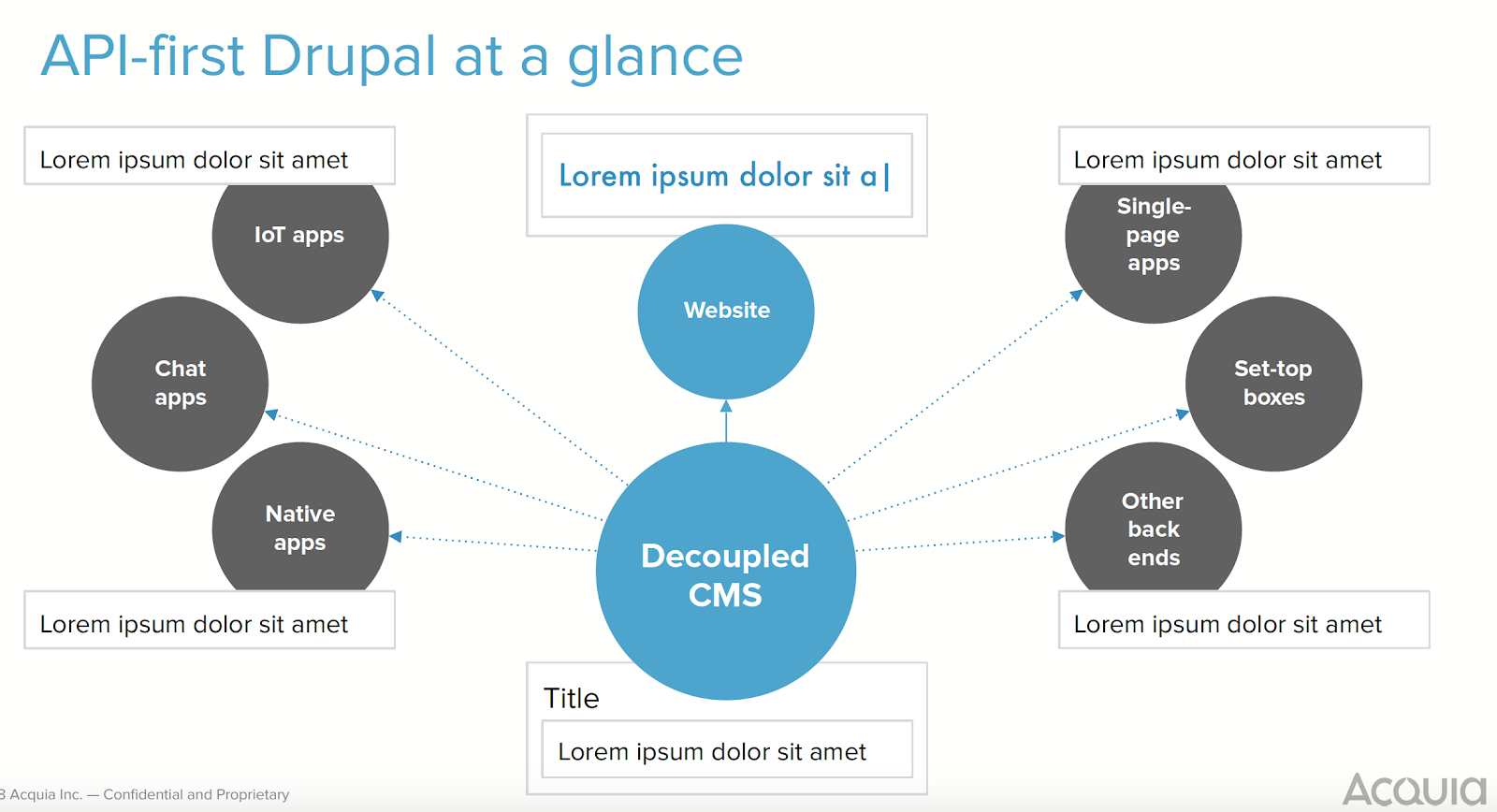 He talked about the issues faced with the other decoupled CMSs, namely the shortcomings for content creators including the lack of in-page editing, the lack of a preview facility and the inability to make layout changes.

From here, the webinar focused on some specifics of the Drupal offering, such as the established ecosystem of tools and SDKs (e.g. JavaScript SDK) and easy-to-use APIs.

Dries talked about the advantages of JSON API (it allows you to get two objects with one query, e.g. data and author) and the plans to move JSON API into the core Drupal platform.

He also gave a brief rundown on GraphQL, which was created by Facebook. He describes it as a tool to query and fetch data in a more simple and efficient way from a decoupled CMS and that it can also be used to complete more complex queries and return ONLY what you want.

Dries gave examples of Drupal’s SDK and reference applications within the Waterwheel ecosystem (such as SDKs for JavaScript and SWIFT, all available as open source). He recommended Headless Lightning and Reservoir as great starting points for building a headless Drupal system.

Why Acquia is an ideal platform for decoupled CMS

From here, Dries took a broader viewpoint, looking at Acquia as an ideal platform for a decoupled CMS. 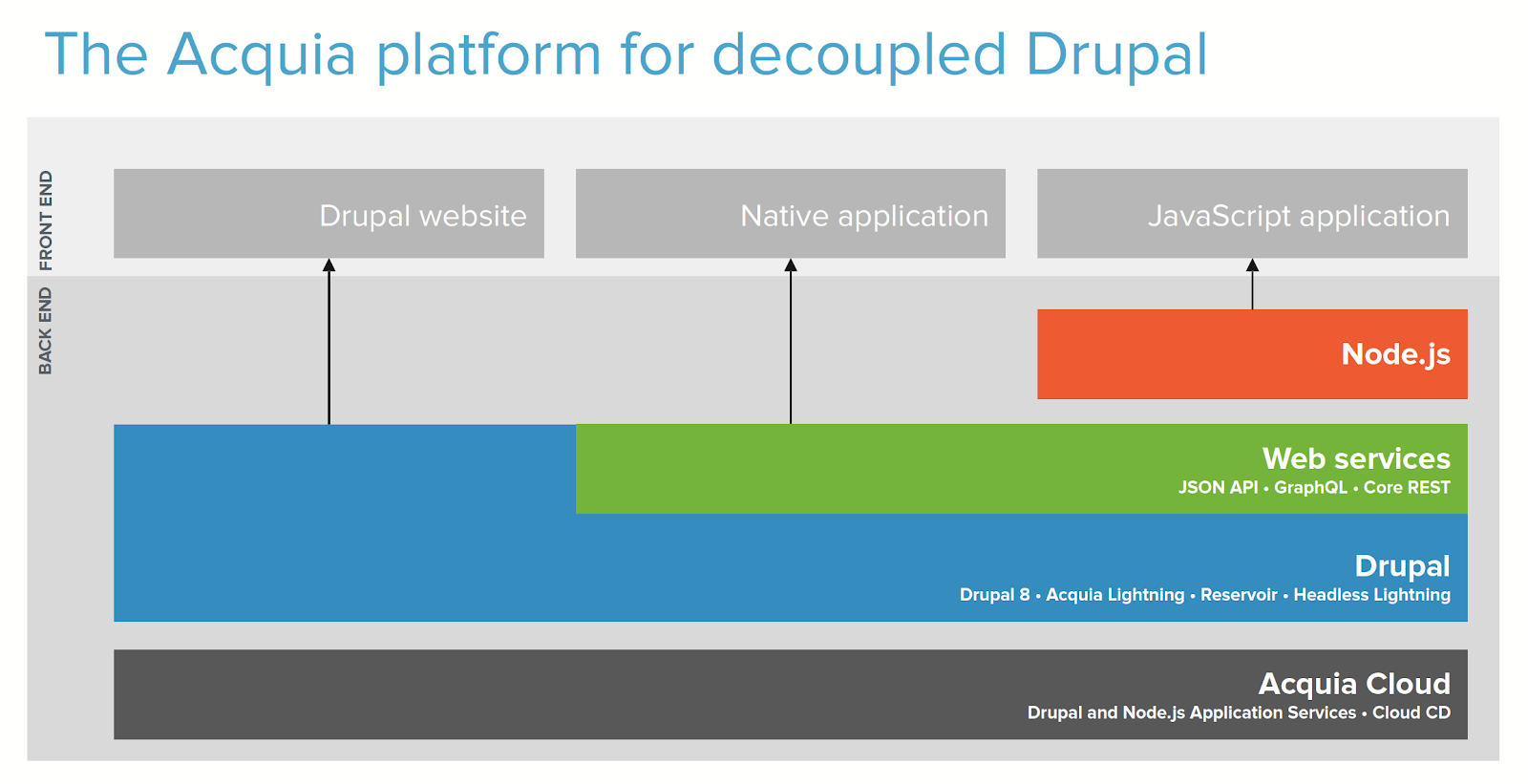 He also showcased the Acquia Cloud user interface, for Drupal as well as Node.js implementations.

The webinar looked at two case studies that use decoupled Drupal:

Finally, before the Q&A session, Dries looked at how to decouple Drupal (and whether it’s a good choice for your project) via a flow chart. The flowchart is designed to help stakeholders decide whether to decouple or not. You can view the flowchart on a recent blog Dries wrote.

There were a couple of important questions (and answers) during the final fifteen minutes of the presentation. We thought these four points were particularly important to mention here…